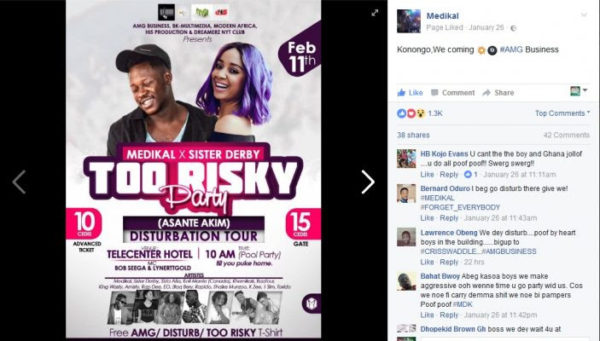 AMG rapper Medikal and the hottest chick in the scene, Sister Derby are set to entertain the entire city of Asante Akim this February 11, inside Telecenter hotel from 10 am till mama calls you.
According to Medikal, the love he has for Asante Akim; Konongo, Odumasi, Agogo, Petriensa, Juaso etc. is huge to the extent that, he will be giving them more of him like never before…
Sister Derby who is actually the woman every guy is crushing on has promised to give the ladies her TOO RISKY vibes that night.
The event has two faces; beginning with the Too Risky Pool Party from 10 am till late, followed by artistes performance.
Medikal and Sister Derby won’t alone be thrilling the people of Asante Akim. Kofi Mante all the way from Canada will come support and entertain, Sista Afia will give it to the guys really hard this time, Baafour will sing for the ladies, Khemikalz will be looking for the ladies with hair all over and King Wasty, Amisty, Rap Dee, EO, Blaq Bery, Rapido, Shaike Munzoo, K Zee, 1 Sim, Toxido, Vhimboy, Paa Kwasi, etc do their thing on stage for you to witness.
There will be series of side attractions including AMG/DISTURB/TOO RISKY T-Shirts give away and a special surprise from Medikal..