The Kwahu Onyemso Hene & Abene Mponua Hene of the Kwahu Traditional Area, Nana Ofori Mireku is celebrating one year of his enstoolment as a Chief.

Talking about the journey as a Chief, Nana Ofori Mireku stated, “One will say leadership is a journey. A journey that has been travelled by an individual who has been handed certain key responsibilities of guiding or leading his people towards  achieving certain objectives, so I will say it has been good although there have been some challenges because coming from a corporate environment and jumping into traditional leadership involves a lot. All the same we are still learning and I know it is well and it shall be well.” 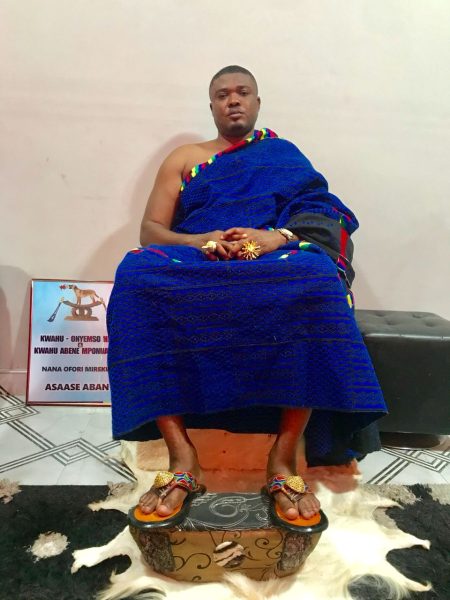 “Employment is a challenge and most of the youth here are entering into farming but it all comes with finance, so if there could be any form of private investor who can come on board and support, we will welcome it.”

Nana Ofori Mireku was enstooled last year, to take over the duties of his late Uncle becoming the youngest traditional Overlord in the eastern part of Ghana.

“Looking at how youthful and vibrant I am, I have impacted so much positive energy into the youth. They see me as their father, brother and leader/King and I am a role model to many.This has equally made me to be extremely humble and proactive in solving issues,” he said.

He went on to advise the youth to put “Odumankuma (God) first” in in their daily lives whiles asking them to remain positive whiles staying away from crime or trouble.

Before becoming a Chief he worked in different industries as a Banker, Management consultant, Event Consultant, and a Farmer.

For leadership roles, he was the President of the Student Representative council (SRC), Vice president – Association for West Africa Entrepreneurs and a member of the Microcredit association of Ghana.