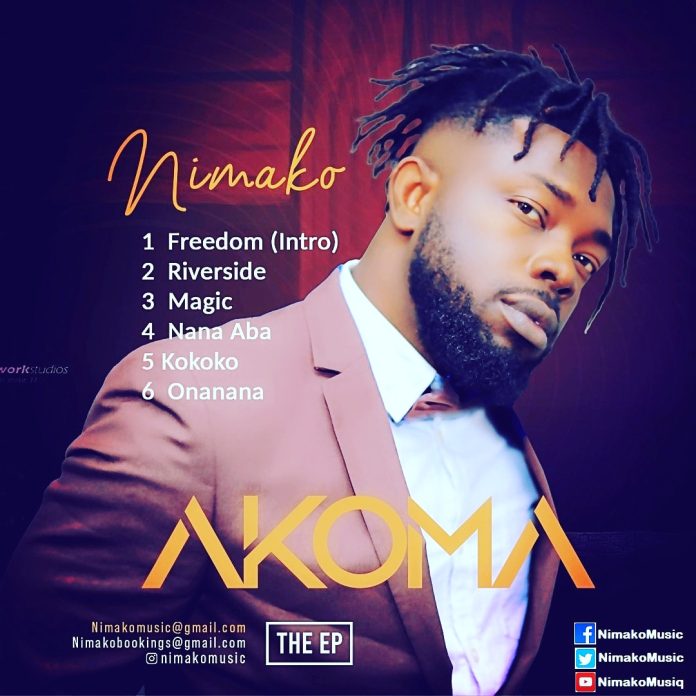 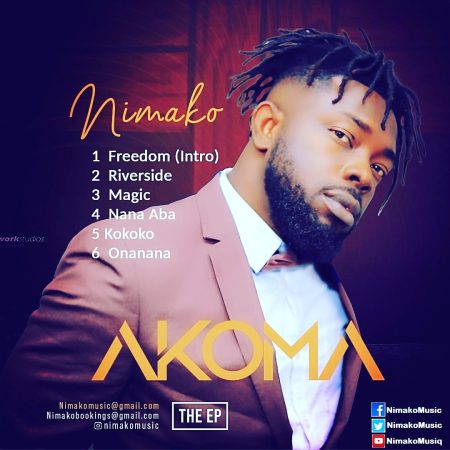 After several months of starving his fans of music, the versatile Ghanaian Music genie drops his very first EP.

Titled “Akoma”, the EP comes with a power-packed catalogue of 6 tracks. This comes along with his full rebrand package to announce his mega exposure into the mainstream market with very good plugs.

Nimako as he’s known by in the music terrain takes a good dive into original Ghanaian sounds and puts together this classic masterpiece in which he embeds the mood of love to capture all ears and eyeballs as he reintroduces himself.

“Akoma” EP came up live on the digital stores few days ago but Nimako kept mute till he officially engages Radio and TV to amplify it. One of the songs “Kokoko” on the EP already is turning out to be the people’s favourite; it’s a Hiplife classic produced for Nimako by Legendary Ghanaian Music Producer, Zapp Mallet.

Explaining The Concept of “Akoma” EP:

“The motivation for putting all this together as an EP came from different people, different perspectives and different situations. All the songs on the album were created / made between different time frames”, — Nimako.

“These songs carry different spirits and accentuates originality; you feel the Ghanaian signature and African spirit in all the songs and it’s a strategy to sell the Ghanaian sound to the world in recent embrace for Afro sounds globally which is known as Afrobeats. There’s no better time than now to revive my brand with a new packaging and identity. And the EP title ‘Akoma’ even defines where I come from, my heritage. It’s like selling my culture, country and continent to the audience within and beyond”, he added.

The word “Akoma” is a Twi word (a Ghanaian dialect) which translates in English as “Heart” or literally means “Love”.

Nimako explores the many sides of love with relatable lyrics and melody on 6 songs. Below is the tracklist for the songs

About 65% of “Akoma” EP weren’t written before recorded; that’s how super-talented this Brother is when it comes to music programming, recording and performances.

The EP has a fine blend of Hiplife, Highlife, Afro Fusion, Reggae & Dancehall. The entire catalogue is powered by Black Unit Entertainment with Benjamin Oppong as the Executive Producer for the project.

He is a Ghanaian Rapper/Singer who doubles as a Music Producer. A well-groomed music head who is also a Graphic Designer and Video Editor on the side as an ‘extra hustle’ to keep family together. His majors are Hiplife, Afrobeats, Afro Fusion, Hiphop, RnB, Dancehall and Reggae; but doesn’t want to be boxed into specific genres as he gets more versatile with different and all styles of music and Melodies.

Nimako has worked with celebrated and legendary Ghanaian Music Producers like Zapp Mallet, Da Hammer, just to name a few.

Kindly connect with him on his social media pages below: