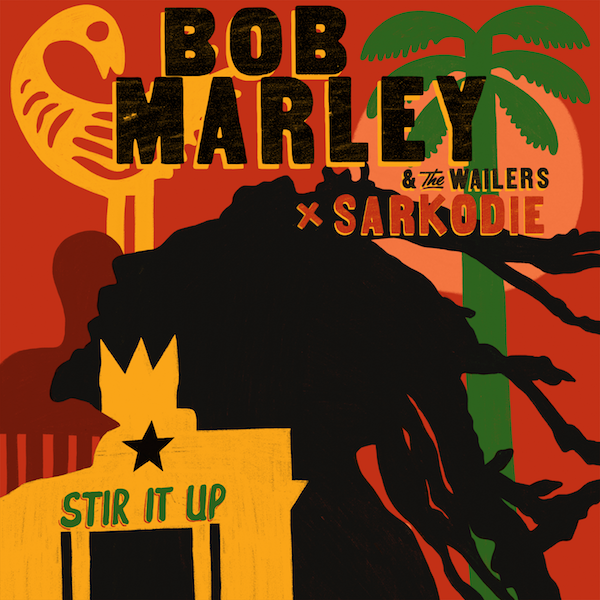 Reggae legends, Bob Marley and The Wailers usher in the new year by reimagining his classic ‘Stir It Up’, in collaboration with Ghanaian rap icon, Sarkodie. We see the Caribbean and Africa unite on one of the most recognisable songs in the world to give us romance and nostalgia. Produced by MOG, this song combines the signature guitar strums and soothing bounce we know and love, with Sarkodie’s iconic flow. ‘Stir It Up’ will connect generations, continents and more!
Bob Marley is one of the most legendary figures in modern music; his influence is immeasurable. The Jamaican singer, musician, and songwriter inspires with social activism and politically conscious lyrics fused with elements of lovers-rock, ska and rocksteady. As a pioneer of Reggae, Bob Marley was posthumously inducted into the Rock and Roll Hall of Fame in 1994. In December 1999, his 1977 album “Exodus” was named Album of the Century by Time Magazine and his song “One Love” was designated Song of the Millennium by the BBC.
With a career spanning almost 20 years, Sarkodie is one of the most successful African rappers. He was the first winner of BET’s Best International Flow artist at the 2019 BET Hip Hop Awards, and he has been crowned Vodafone Ghana Music Award’s “Artiste of the Decade”. Sarkodie’s signature pace, cadence and whit permeate every track, and this is no different.
When speaking on this historic collaboration with Bob Marley, Sarkodie said:
“What a way to kick start this year! Definitely one of the highest moments in my career/life… It’s been a BIG torture keeping quiet about this particular project but I guess it’s always the best when the timing is right. Big shouts to the team at Island records, my team and the Marley family for getting me on this amazing project with the legend Bob Marley. Such a blessing to lay my vocals right next to the original vocals of the legend…I will be sharing how the whole process happened… for now, get ready to enjoy the remake of Bob Marley’s ‘Stir It Up’ produced by MOG”
The official music video for ‘Stir It Up’ showcases the vibrant relationship between Jamaica and Ghana. With Sarkodie leading on creative direction, these Ghana-shot visuals authentically explore identity, unity and community. Watch the video here.
Stream ‘Stir It Up’ by Bob Marley and Sarkodie now!

Bob Marley & The Wailers · Stir It Up

Check Out : Onyansapow Kicks Off The Year With ‘The Prayer’