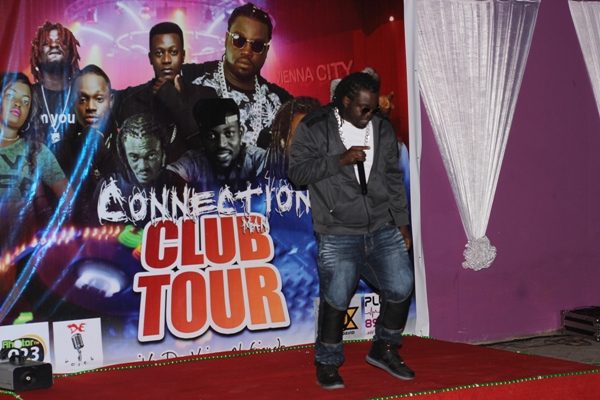 Finally the Connection Man Tour had its climax at the Vienna City Accra branch which is located at Circle. The night for the event saw music lovers and merry makers trooping out in their numbers to be entertained. Others who were still celebrating the end of the fasting period joined in the excitement as well.
As at 10pm when the show was supposed to start itself, fans who were there choose to dance to the tunes Dj Mirror was playing and this had to put the show on hold for a few hours as hits upon hits were being played. Finally at 2am as a larger crowd gathered the show began and the anticipation was massive as well.
Mr Logic the dancehall Dada began the show with a lil bit of freestyling. Vyrbant Faya followed up with his ‘Mampi’ flow and other songs he performed as well. Nero X was one act who wasn’t billed to perform but showed much love and passed through to support as well. De Voice, the main act for the Tour was next to do his own thing as the fans cheered on continuously.
GodMother Shegee Styla was one of the best performers on the night. Her style of dancehall is just of top notch with the new blend we have now. PUOM Music’s Ras Kuuku ended the show with his vibes.