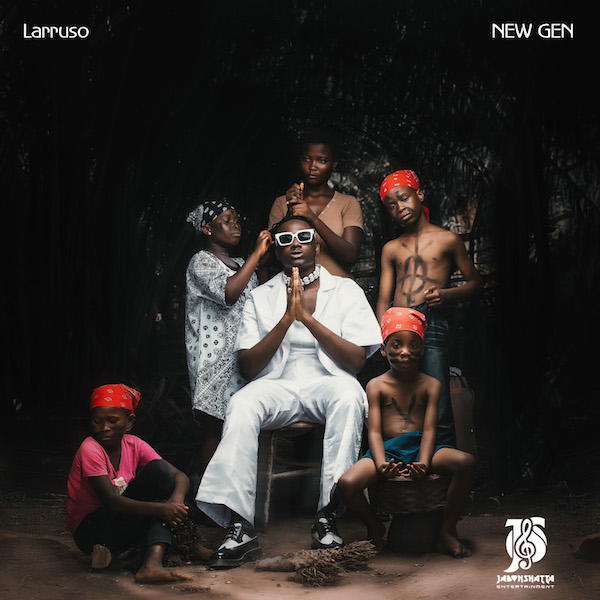 Afro-dancehall sensation, Larruso’s debut EP offers a feel-good experience that places him in the fore of Ghanaian dancehall music as he freewheels over a range of experimental melodies. Listen here: https://onerpm.lnk.to/NewGen-EP

Previewing with two singles prior to its official announcement ‘’New Gen’’ does not fall short of a smooth supply of tuneful beat selections and potential bangers. It is an aggregate of Larruso’s vision so far, meld together by familiar, yet refreshing concepts and a feature list accommodating of the young artist’s style.

The 8-track EP books features from the likes of the god MC, M.anifest, Suzzway, Nigeria’s very own, Bella Shmurda, Kelvyn Boy, Samini and J. Derobie, aside a compelling mix of producers which include The One, Beatz Dakay, Phantom, Jaemally, Gigz Beatz, Mix Master Garzy and Finchy.

For a project meant to inspire the prodigy’s avant-gardist role in his time, things are brought to a roaring start on the pre-released ‘New Gen’. Here, Larruso ushers in the age of this new generation he’s standing in for. ‘’We have a big dream and, how our family fit look past streets wey we dey pon?’’, he questions, backing up with chants and verses of empowerment. This invigorating theme persists into the EP’s first pre-released song ‘The Truth’ featuring the god MC, Manifest. On the soothing song, both artists free their energies into a pool of thoughts that are expressive of life in a country that grows increasingly hellish for the generation in question.

The tone of the EP hereafter shifts to a more ambient and easy-going sound ‘Body’ featuring Suzzway goes big on Larruso’s glossy vocals, while ‘Wolewa’ (Come Inside) featuring Nigeria’s very own, Bella Shmurda embraces a fun feel. The latter drops alongside a colorful video directed by Yaw Skyface and has lots of choreography to keep the song’s playfulness untouched. ‘Hit & Run’ isn’t far behind the explosive Afrobeat wave either, bearing the candid and fleeting emotions of the self-proclaimed nineties bad boy, before ushering in the project’s biggest in terms of collaborations ‘No Chance’.

Sweeping listeners back into his preferred domain ‘No Chance’ has Larruso tag Kelyvn Boy and Samini on the highly palatable Finchy production to make known their uncompromising nature to much finesse. ‘Addicted’ featuring J. Derobie slots in next to ferry listeners aboard the love express once more, yielding crooned verses of how special Larruso’s love interest is to him: ‘’Cause you know me and you have a different vibe/Make up your mind, come with me let’s ride’’. The finally EP comes to a soothing close thanks to Larruso’s resolute composure on solo effort ‘High Meditation’, in a bid to not to escape bad memories.

‘’New Gen’’ projects the Afro-dancehall star’s status as torchbearer in it’s entirety and is effortless in setting itself up as a benchmark for all dancehall EP’s to follow. Stream ‘’New Gen’’ by Larruso here: