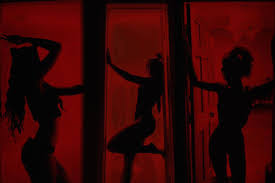 The Silhouette Challenge requires an individual to pose in a doorway in a manner that the camera captures only a black silhouette of their body.
Then he or she flips from wearing nightwear to having nothing on while twisting and dancing in a dim-lit room with only a red luminescent bulb.

The video is often recorded to the sound of Paul Anka’s ‘Put your hand on my shoulder’, a song produced in the 1950s.
The challenge which first started on TikTok has been trending on social media with a number of people including some Ghanaian celebrities participating in it.
Although critics have spoken against it, others including some Ghanaians have created and uploaded their own interesting versions of the trend.

As expected, the controversial actress and socialite, Afia Schwarzenegger has joined in the craze as a video of herself actively participating in the challenge was spotted on her Instagram page.
Dressed in a bathrobe on a staircase, she seductively lifted her legs and placed them on the banister after which she totally flipped into a red-lit atmosphere.
The atmosphere captured a silhouette of her body which caused a stir on social media.

Giving the competition a new perspective, the Ghanaian gospel musician, Nana Yaw Boakye-Yiadom, popularly known as MOG, and his wife uploaded a creative version of the silhouette challenge on social media.
Theirs was different from the norm as the couple was captured in the video holding a Bible and sharing God’s message instead of dancing naked in the red light.

Another celebrity who many could comfortably predict would engage in the competition, Rosemond Brown a.k.a Akuapem Poloo uploaded her version of the silhouette challenge on social media but it was accompanied by something very much unanticipated.
The anticipation of her fans and viewers was cut short when at the later part of the video, her son stormed the room begging her not to continue with it.
She then heeded the advice and discontinued it.

Pappy Kojo joined the craze, not to really participate but to make a mockery of ‘Akuapem Poloo’ who could not properly pronounce the word ‘Silhouette’.
Instead of recording to the sound of Paul Anka’s ‘Put your hand on my shoulder’, the ‘Fante Van Damme’ rather extracted his audio from one of Akuapem Poloo’s videos and made a humorous mockery out of it.